HK L-137 was orally administered to mice, and the effect on influenza virus infection was examined. In the HK L-137 group, there was a significant secretion of IFN-β, which is one of the cytokines that play an extremely important role in the host defense against infection with viruses and bacteria. In addition, HK L-137 prolonged the survival period of mice that were infected with highly virulent strains of the influenza virus.

A lethal dose of a highly virulent strain of influenza virus(100 pfu) was nasally infected to mice, and the serum concentration of IFN-β, the virus titer in pulmonary tissues, and the survival period were examined. Mice in the HK L-137 group were orally administered 75 mg/kg of HK L-137 once daily for 15 days from 7 days before the infection. 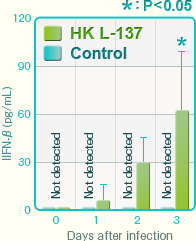 Serum concentration of IFN-β after influenza virus infectionIFN-β was not detected in the control group, but high levels of IFN- IFN-β were detected in the mice orally administered HK L-137. 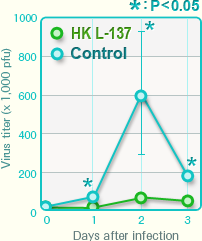 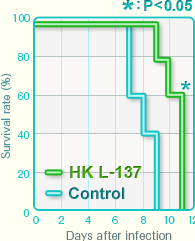 Oral administration of HK L-137 significantly suppresses the growth of influenza virus in infected mice, which may lead to prolongation of the survival period of the mice. It is possible that HK L-137 suppresses the virus growth by inducing IFN-β production at the early stages of infection.

A wide variety of viruses can effectively spread through their suppression of IFN production. HK L-137 induced IFN-β production even in the mice infected with virulent influenza viruses that force the host not to produce IFN-β. Therefore, HK L-137 will be effective to prevent virus infection, especially at the early stage of the infection.