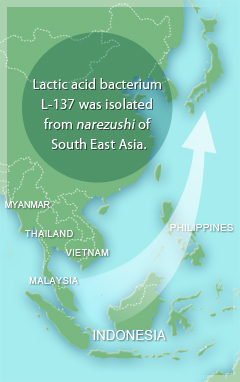 Although sushi, which is made with vinegared rice, such as nigiri-zushi, is familiar to people all over Japan, its origin is a preserved food called narezushi that is prepared by fermenting fish and rice with lactic acid bacteria. In Japan, funazushi of Shiga Prefecture is well known as an example of such narezushi. It is believed that this narezushi originated in Southeast Asia. Lactic acid bacterium L-137 was isolated from this narezushi of Southeast Asia.

HK L-137 is not a kind of lactic acid bacteria that helps maintenance of good intestinal conditions, but rather enhances our body's defense system, namely immunity.

Our continuous studies revealed that when lactic acid bacterium L-137 is heat-treated under optimum conditions, its immunostimulating activity has increased and become stable compared to the living one. This is the advantage of heat-treatment.

We have been considering the meaning of health, and developing products that offer health benefits, based on our corporate philosophy of “To serve for a healthier life tomorrow.”

In our business focusing on food and health, we have paid close attention to immunity, which is the basis of health. We have been conducting research on immunity ever since. In the course of our journey of the research, we encountered lactic acid bacterium L-137.

In 1989, we started to collaborate with one of the Japan’s most prestigious immunology laboratories, the Medical Institute of Bioregulation, Kyushu University. We then started full-scale research of immunity to find new substances that would help to improve our immune functions.

However, we had been unable to find any substances which fit that description until we encountered one lactic acid bacterium in 1994. This lactic acid bacterium strain showed interesting fermentation properties. We tried examining the immunological characteristics of the bacterium and found that it exhibited extremely strong immunostimulating activity (the ability to enhance immunity) that had not been seen in any other substances before. In addition, heat-treatment enhanced, rather than weakened, the immunostimulating activity. As you may have guessed, this bacterium was Lactobacillus plantarum strain L-137.

Ever since, we have continued to find the optimal conditions of culture and processing conditions to further improve the excellent immunostimulating activity of this bacterium. Through this effort, the health ingredient “HK L-137” was born, which is a heat-killed lactic acid bacterium L-137.